In August 2013 I got the opportunity to visit the dive-under in the under-reconstruction rail line Utrecht-‘s Hertogenbosch. The concretework of the dive under was complete, as were part of the installations. But rails were no where to be found, leaving this tunnel unconnected on both sides.

With ever-increasing rail traffic and the installation of an urban commuter rail system on the same tracks, those two tracks no longer sufficed. In 2007 construction was started on the doubling (to four tracks) of the Utrecht – Houten Castellum part of the line, which means that between Utrecht and Lunetten (where the line to Arnhem branches off), 8 tracks (two intercity and two local tracks each to both Arnhem and ‘s Hertogenbosch) will run in parallel.

In the 4-track section to Houten, local trains run sandwiched inbetween the intercity tracks, but in the 8-track section, they are the westernmost tracks, while the intercity tracks from and to Houten are the 4th and 7th track (counting from the west) there. Confused much? See this track plan on Sporenplan.nl. This switchover requires either switches and level crossings (which gnaw away rail capacity) or dive-unders (or fly overs). One of which is the subject of this post.

A specialty of this tunnel is that, due to clever engineering of a “hole” in the roof, this technically is two underground sections of less than 100 (I think) metre each, which means the dive under doesn’t need to comply to “tunnel” regulations, such as having extensive fire detection, sprinkler, and evacuation systems. 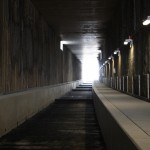 Inside of the tunnel 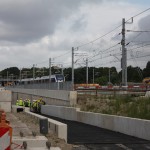 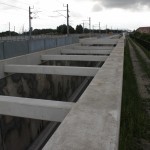 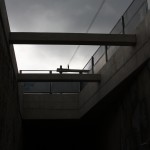 Dark skies loom over us 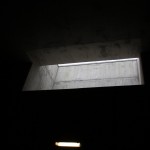 The holes in the roof that legally make this two tunnels, to escape tunnel regulations 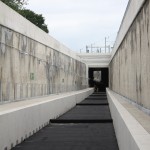 The tunnel floor is lined with sounddampening material

Visit date: august 31, 2013
Status at last visit: unfinished, unconnected, to be used in the near future
Current status: unknown